An avid reader (who read under the bedclothes and in the bath), as a young girl, Hazel Edwards wrote her first novel in grade six, a mystery about adventurous children stuck in a mine. This passion for writing and character development continued and after working as a secondary school teacher, at twenty-seven, Hazel published her first novel, ‘General Store’, a book based on life in a rural town.

It is Hazel’s third published work however that is her most well known, the children’s picture book classic, ‘There’s a Hippopotamus on Our Roof Eating Cake’. This special imaginary friend has been cherished by children and parents alike and led to the dubious honour of Hazel often being referred to as ‘the Hippo Lady’.

Since its publication in 1980, the age-less Hippopotamus on the roof has been reprinted annually, evolved into a series of seven picture books and inspired a junior chapter book, classroom play scripts, a musical stage production and a short movie.  The Hippopotamus books have also been translated into Braille and Auslan signing for the hearing impaired and were presented as an official Australian Government gift to the children of Princess Mary of Denmark. 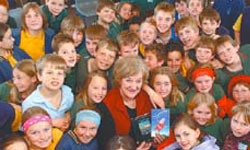 Whilst Hazel loves creating quirky, feisty characters for newly independent readers in her easy-to-read junior chapter books (such as Sleuth Astrid the mind-reading chook), she thrives on writing for all ages and has published over 200 books across a range of subjects and genres.

Hazel has collaborated with experts in various fields to publish adult non-fiction titles such as such as ‘ Difficult Personalities’,  and helps people craft stories about their ancestry in her popular workshop based on her book ‘ Writing a Non- Boring Family History”. 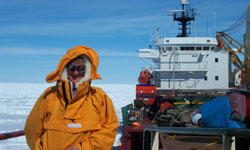 A fan of interesting and unusual locations, Hazel has been a guest writer in residence at the former Fremantle Prison (which is now the Fremantle Children's Literature Centre), the Mt Newman mining community in outback WA, a visiting author to Pasir Ridge International School in East Kalimantan, Indonesia and an author ambassador to Youfu West Street International School in Nanjing, China. 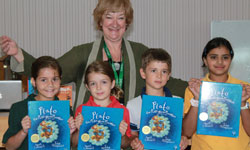 Passionate about literacy and creativity, Hazel has mentored gifted children and proudly held the title of Reading Ambassdor for various organisations.  Formerly a director  on the Committee of Management of the Australian Society of Authors, Hazel was awarded an OAM for Literature in 2013.

A keynote speaker, Hazel has been involved in web-chats internationally as a way of sharing books, ideas and encouraging literacy. She has even been a ‘Living Book’ online, to answer questions.

Downloadable bio of Hazel for organisers under Media Resources.

Married to Garnet, with two adult children , Hazel writes a new story for her three grandsons each birthday. Hazel enjoys swimming, bellydancing and reading in the bath. Though not simultaneously!