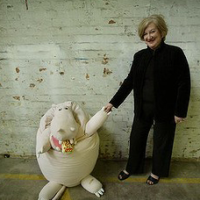 Hazel talks about the business of being an author in the digital age and marketing yourself online in this article from The Age.

Writers are authoring their own destinies

TO PARENTS and children, she is known affectionately as the hippo lady but her business cards read: Hazel Edwards, authorpreneur.

The word was coined three years ago by the writer of children's books best known for There's a Hippopotamus on Our Roof Eating Cake, when Edwards was scratching around for a name for a workshop about the convergence of authors' creative and commercial interests.

Edwards is one of a new breed of authors and illustrators who have turned themselves into a small business to take advantage of the internet.

An ambassador for next year's National Year of Reading, she argues it is not enough for authors to craft words or images for specific audiences. Writers must learn marketing, publicity, technology, and legal skills to create and maintain their self-employment in the ''business of ideas''.

''A professional writer is a very small business of one person; a solo trader in literary ideas,'' she says. ''Those who are not businesslike are unlikely to survive.''

The digital world holds promise for established authors - those with extensive backlists, children's writers, whose potential readership turns over every six years or so, and writers of fantasy, adventure and romance.

But bar a handful of celebrity writers, authors can't earn a living from publishers' advances and royalties or fees from public speaking or freelance writing engagements.

Edwards has found it difficult, however, to persuade fellow writers to exploit their material, not least because self-publishing a quality product requires skill in graphic design, editing and marketing.

''Authors need to learn new skills fast and many have a philosophical conflict,'' Edwards says. ''They feel the worth of their writing should be obvious and that the business of marketing and promoting their book is an additional role, after the hard work invested in researching and writing. Many regard marketing as part of the financials and many struggle even with account keeping.''

In a competitive market where the shelf life of a new release can be as little as one month, author Tony Park is a model for contemporary authors. Signed to Pan Macmillan, he has been tireless in his efforts to build a loyal readership, helping his eighth adventure novel, African Dawn, become an Australian fiction bestseller.

''You have to stay in touch with your regular customers and listen to what they're saying, and you have to continually look for new markets and new avenues to spread the word,'' Park says from Africa.

Edwards says an author's website is their shopfront and can be as effective as a publisher's in reaching an international online market. Her e-books have fresh illustrations and have been reformatted, some with merchandise, and she has downloadable teaching resources.

Park uses a US-based online newsletter company to manage a database of readers and distribute a quarterly newsletter. He has spoken at travel roadshows showcasing Africa and has led two safari tours to Africa. He also appears at Rotary and Probus clubs functions and at charity fundraisers where he has raised money by auctioning character names - people pay to have their name assigned to a fictional character. Facebook gets people talking about his books. He's made friends with readers and several have helped him with research and fact-checking.

According to research presented to the federal government's Book Industry Strategy Group, web fiction allows authors to seem more personal and available while maintaining low prices for customers and high margins for authors.

PROV 'Complete Your Book in a Year' starts on first Friday of each month, 10am-1pm. North Melb Archives.